Introduction: What is the Python __name__ variable and when to use it in your code.

You probably have seen this block of code many times before:

You probably also know the purpose of this code, it means the code below if __name__ == "__main__" statement is executed when we execute the file as a standalone file. But why do we need this extra block?

The end results are exactly the same:

So why do we even bother to put that into an if block?

The answer is in the special __name__ variable and the scope that it executes. According to the Python documentation, https://docs.python.org/3/library/__main__.html, the module can discover whether or not it is running as a standalone script (in the __main__ scope) or as an imported module by checking this variable.

Here is another documentation link that explains the same concept, https://docs.python.org/3/tutorial/modules.html#executing-modules-as-scripts: 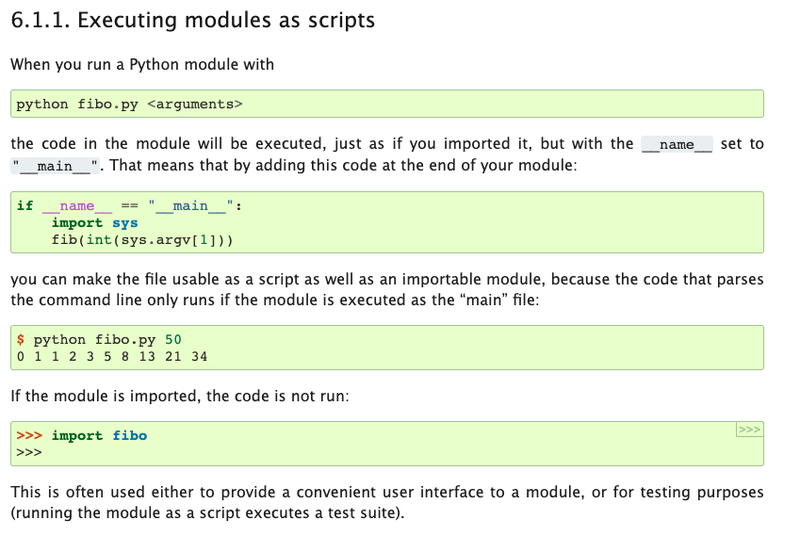 I understand it might not be intuitive to think of the Python code as a re-usable module, especially if someone is just starting to learn Python. If we start to think of the script as a module that can be executed both by itself or be imported by other Python scripts, this would make a lot more sense.

Let's look at another follow-up example.

Separation of Command-Line Execution vs. Import

Consider the following two scripts that do nothing but import script1.py and script2.py, respectively (you omit the .py extension when doing imports):

When we execute them, these are the results:

The result of script4.py is probably NOT what you wanted, right? The function was invoked automatically when we import the non-if block (script4.py) whereas the function will be available when imported but ONLY execute when it is invoked by itself. There are some cases where you'd like some code to always execute when it is imported, but most of the time we'd like to keep the functions we import silently until we need to use them.

We can also test this out in an interactive prompt:

I hope this post is useful to you, let me know what you think and leave me a comment below.