Back in 2019, when in-person meetings are possible, I did a lightning talk at the Pacific Northwest Automation Meetup (https://www.meetup.com/Northwest-Network-Automation/events/263296418) titled 'Evolution of Network Automation: As Seen by Eric Chou': 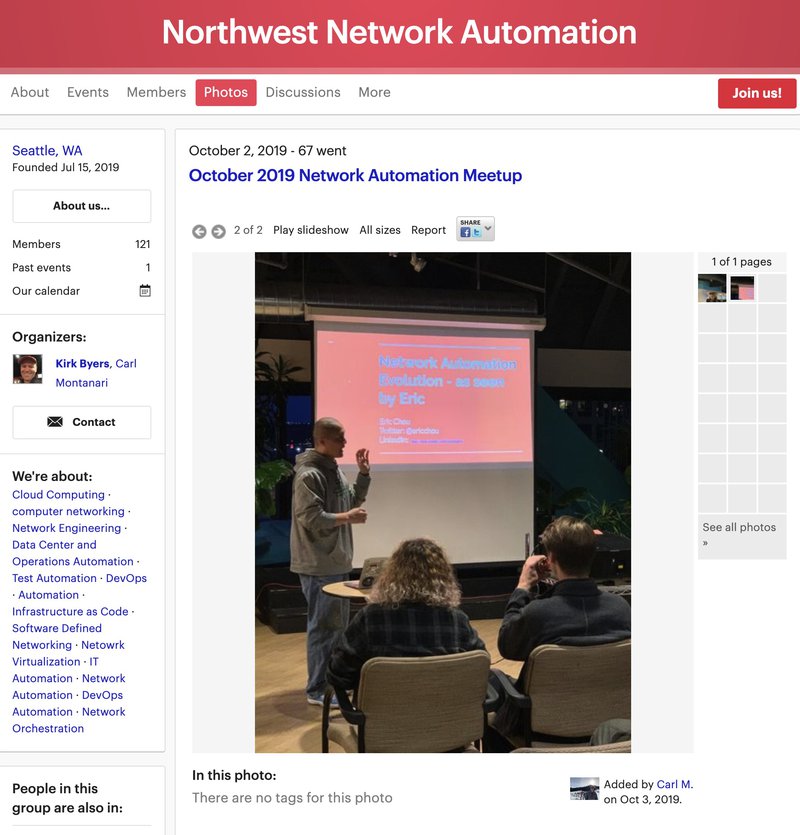 It was actually kind of amazing to think at that time I actually worked in the networking industry for almost 20 years (my first full-time networking gig was 2000). It was a very different landscape back then. The high ceiling bandwidth was measured in OC (OC-12, OC-48, etc), the common commercial last miles were T1 and frame-relays, and residential Broadband was just about to take off. Boy, have things changed!

I want to revisit some of the ideas I thought of for that presentation and write them down in a blog format. Mostly because it would be interesting to look back a few years later if I am lucky enough to stay in this industry. Since I cannot find the slides (all the more reason to preserve the thoughts), I am putting them down as fresh thoughts while recalling them from memory.

Of course, this is entirely looked thru my own experience, with all of my own bias and faults. People will disagree with me, and that is ok. There is no expectation of agreement, nor am I trying to convince or persuade anybody of the ideas below. They are simply me putting my opinions out for my own benefit that might be of reading pleasure for someone else.

Telecommunications, of course, owned a majority part of its roots to Mr. Alexander Graham Bell, who invented and patented the first telephone (you didn't think I was going back to the 1800s with this blog post, did you?). He also co-founded the AT&T Corporation that owned the telco space for years to come. There really was no other player. As expected, all of the innovations and breakthroughs came from inside of the same company. This is obviously before my time, but I would imagine engineers at AT&T would be at the top of the food chain as far as owning the latest and the greatest innovations. This is still true of many countries that have state-owned telecommunication providers or with a largely monopolistic telecommunication company, they would play a major role in the innovation that would trigger down to everybody else.

Then in the US came the Breakup of the Bell System and the Telecommunication Act of 1996. Combined, the acts not only reduce the original AT&T company by over 70%, but they also allow cross-media ownership. The 'baby bells' were smaller with a much thinner margin, many consolidations and merges later, the companies necessarily need to reduce the amount of research and development budget, or at least be more mindful of them (I am oversimplifying, of course).

As the telecommunication companies were busy maintaining their business, for some, trying to stay above water, it is in my opinion that the majority of the innovation was now shifting toward network equipment vendors from the telcos. The Internet stock market boom toward the end of the 1990s certainly turbocharged the arms race of infrastructure build-out. There was a big dip from the burst of the Internet bubble in the early 2000s, but they were quickly filled by the increased demand for residential broadband. I witnessed first-hand the growth of residential broadband as I was working for Time Warner Cable / RoadRunner at the time. As a young engineer, I moved to one of the TWC's Southern California markets with barely over 23 employees in their cable broadband beta and grow the market to over 40,000 three years later.

This is also the period of time where I believe the innovation in the industry was mostly concentrated in network equipment vendors. Cisco Systems went public in the year 1990 with $224 million in capitalization, by March 2000, they became the most valuable company in the world with a market capitalization of $500 billion (they are currently at about $200 billion).

Cisco was one of the first companies to sell a dedicated network node that supports multiple network protocols (Ethernet, Token Ring, TCP/IP, Novel IPX/SPX, AppleTalk). They combined both hardware and software into a single node and continued to keep up with the technology either with in-house technology or thru their aggressive acquisition of smaller vendors (Kalpana, Crescendo). Juniper Networks was another networking vendor innovating in the high-end router market with about 1/3 of the market share in high-end routers by 2001. As an employee, I still remember the excitement and buzz around the Sunnyvale campus when the company reached $2 billion in revenue in 2005.

In my opinion, the vendors took over the void vacated by the telcos when it comes to innovation in the network engineering field. It seems every few months the equipment speed would double with more features crammed into a single unit, and as engineers, we are always behind the 9-ball when it comes to keeping up with the technologies.

The article is getting a bit long, I am leaving the next phases for Part 2 next week. As mentioned, this is all being seen thru my own tainted lens. I would be interested in hearing what others have to say about this subject. If you'd like, leave me a comment about your thoughts on the topic.